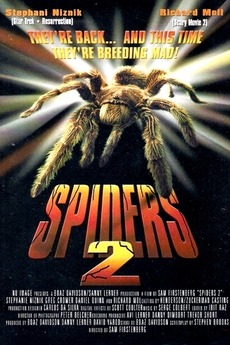 This is the Alien Resurrection of movies about giant spiders, only far worse.

Jason and Alexandra are a married couple who end up shipwrecked in the ocean after finding a burned-out wreck of a sailboat. They get picked up by a cargo ship, only to discover that the ship is really a mobile aquatic laboratory for a mad scientist intent on genetically splicing humans with spider DNA. For some reason, this means he must first breed spider eggs in living human hosts.  Yep, people are birthing giant spiders, right through their ribcages. Also, these spiders aren’t sure if they’re puppets or bad CG, and they have no idea how big they’re supposed to be.

Ok, first off, yes, this is an awful premise for a movie. However, I have seen worse. While the script is atrocious, it’s also not the worst sin this movie commits. The thing that really kills it is that I can’t tell if it wants to be a legit monster movie or a piece of made-for-tv SY-FY trash. There is nudity, a little gore, a bit of blood, and a budget that could have been rolled up and stuck in the back of my shoe while I was wearing it. It’s the effects that take this film from bad to laughably bad. Sure, hammy overacting and poor writer choices are one thing, but badly digitizing people to interact with CG spiders? Now that’s unforgivable.

What’s also unforgivable is just how stupid the Alexandra character appears to be. A strange doctor is repeatedly injecting her sick husband, but she’s too busy getting seduced by the captain to notice that for some reason everything on board the dirty ship is in Russian, there is no cargo despite the large number of containers on deck, and they’re hauling way more meat than they need to be considering the size of the crew. Also, they’re going in circles. Jason gets it, and he’s freaking zonked out on injectable candy shots from the evil scowling love doctor. How could Alexandra not? It literally takes the captain trying to seduce/rape her and her finding the remains of the burned-out ship she saw a couple of days before to realize that things aren’t hunky-dory.

This does lead me to another point about this movie, though. It begins with a bunch of twenty-somethings being attacked by what must be the cargo ship’s crew so they can be used for spider babies. Why did this mad scientist plot so poorly that they had to go kidnap people off boats to actually do any work? That seems like a bad plan.

Spiders 2 is painfully bad. I loathed it. I don’t loathe everything about it, as the female lead gave it a pretty good showing of her ability to actually act, but everything else was just amateur hour.  And not amateur hour with heart.